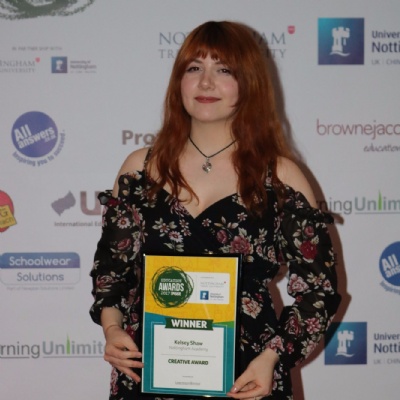 Former Academy pupil Kelsey has won another award for her musical talent. The singer songwriter from Nottingham continues to wow audiences withe her beautiful voice and exceptional musical composition.

Kelsey completed her sixth form education at Nottingham Academy SIxth Form in the summer of 2017 where she achieved an A* in film studies, an A* in music and a B in English literature at AS-level. Kelsey went on to study music at the University of Derby. Since then music teacher Miss Watson nominated her for this prestigious award at the Nottingham Post Education Awards where another three Nottingham Academy pupils were shortlisted. Kelsey also recently won the Nottingham Young Creative Award and was a finalist in the Future Sound of Nottingham competition.

Kelsey is certainly 'one to watch', she told Nottingham Post "I'd like to one day be able to earn a living doing what I love, writing music and performing.